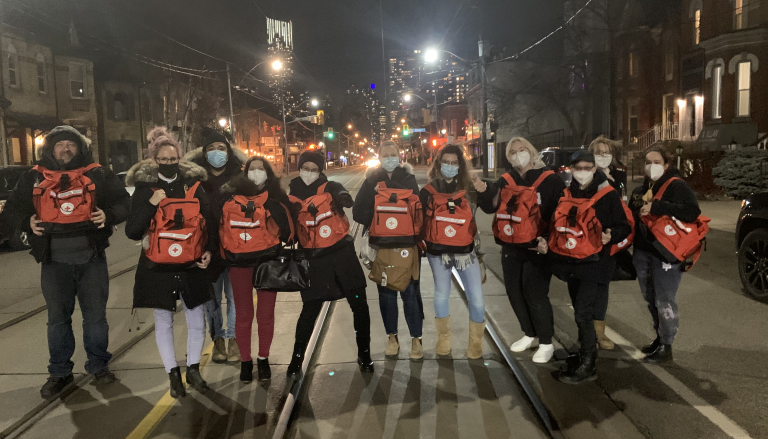 The opioid crisis in Toronto continues to intensify during the COVID-19 pandemic and opioid-related deaths continue to rise in record breaking numbers. The data and statistics are startling and sombre. The opioid overdose crisis remains a public health emergency that requires immediate mitigation and swift action.

CPR-OPR uses a combination of current guidelines and protocols from “lay rescuer CPR” and more advanced skills from Basic Life Support (BLS). Using a collection of evidence-based first aid response practices, the training provides learners, based on their training and confidence level, with a toolkit of options to safely provide a person experiencing opioid poisoning with the recommended first aid response.

Since opioid poisoning causes respiratory arrest, providing the person with oxygen quickly and safely is recommended. This can best be done with two-rescuers performing ventilations coupled with chest compressions while using a Bag-Valve Mask (BVM) and wearing 3- to 4-piece PPE. These measures are crucial for the safety of the responders and will allow them to provide vital oxygen without fear of cross contamination of communicable disease and toxic chemicals.

Nick took the guidelines and standards from the newly developed CPR-OPR program and created a specific course to target those who were on the frontlines of the opioid crisis. Since opioid-related deaths can often be averted if the person consuming opioids is in the presence of “peers”, the course was named “Peer Support Responder” with the intention to target people who use drugs (PWUD), their friends, allies, and frontline workers who are in proximity and can intervene quickly to avert an accidental opioid related fatality.

Three days after the launch of the program (March 8, 2021), a medical statement was released by the American Heart Association (AHA). Almost all the additions and recommendations in CPR-OPR were affirmed. The AHA report is called: “Opioid-Associated Out-of-Hospital Cardiac Arrest: Distinctive Clinical Features and Implications for Health Care and Public Responses.”1It states that providing ventilations and airway management coupled with chest compressions and naloxone administration is the recommended approach for those most at risk and likely to encounter an opioid overdose. It also stipulates that regular and frequent training is required to develop mastery in the skills needed to provide ventilations effectively. Nick and his team were overjoyed to learn about this medical statement as it affirms that the training meets the current medical standards for opioid response – a program co-created with members of the affected community.

More than half of the participants identified as a visible minority (54.4%). Of the group, 41% identified as 2SLGBTQIA+, 21.7% were Indigenous and 22% were ACB (African, Caribbean, Black). 69.7% of participants witnessed an opioid overdose in their lifetime. 48% said they witnessed an overdose in the last 3 months and 63% within the last year (with 34% seeing more than 5 in just one year).

A quarter of the participants (25%) had used drugs and experienced an overdose themselves. While many had received some form of training either formally or informally (i.e., naloxone training) prior to taking the course, most of the participants neither received comprehensive overdose response training (with or without ventilations and airway management) nor regular hands-on skills training.

More than half of the participants (59%) received training on how to check for a pulse, yet less than half (43%) were trained to provide assisted breathing (ventilations-only). This was interesting to learn because these two skills are often taught together. Only 31% of the participants knew how to ventilate using a one-way valve resuscitation mask. Even less participants (26%) knew how to use a Bag-Valve Mask (BVM). Overall, 64% of participants did not feel confident or felt unsure if they could provide critical lifesaving ventilations based on their previous training.

More than half of the participants (63%) disagreed with the current recommendations of “compression only CPR” for opioid poisoning during COVID-19. Most participants (65.2%) felt that giving oxygen leads to better outcomes in cases of opioid overdose, while 31.8% were not sure. Interestingly, when asked in a separate question if receiving oxygen to survive an overdose is a health right of the person, almost all the participants (97.6 %) agreed.

Sixty-nine percent (69%) agreed that the use of a Bag-Valve Mask should be the first method of oxygen delivery by way of ventilations. More than half of participants (58%) felt that any method of providing ventilations poses a risk of cross-infection. The major risks identified were communicable diseases (such as COVID-19) and toxic chemicals; however, responders affirmed that if the proper PPE and Bag-Valve Mask were utilized, risk levels would significantly decrease and therefore providing ventilations should be treated equally to compressions.

Half of the participants (50%) did not know how to use 3 or 4-piece PPE. Sixty percent (60%) never learned how to “put on” or “take off” PPE (donning/doffing). Almost all the participants had never practiced lifesaving skills while wearing PPE and even fewer in conjunction with using a Bag-Valve Mask (BVM) or one-way valve mask as a single rescuer or two-rescuer team. It was interesting to learn this considering that this training took place 1 year and 3 months into the COVID-19 pandemic, during which PPE became widely used.

Less than half of the participants (46%) received first aid/CPR training more than a year ago, while an almost equal number of participants (44.3%) did not have any formal first aid/CPR training. Considering that 94% of responders were in the field of harm reduction and 66.6% were frontline workers, lack of training was one of the leading identifiable gaps that was discovered in the data and described in this report.

Sixty-four percent (64%) of responders showed an overall lack of confidence to manage an overdose properly before the training. 34.4% were somewhat confident, and 29.5% were not confident at all. The level of confidence of the participants to respond to an opioid overdose was very limited prior to the Peer Support Responder (CPR-OPR) course; however, participants felt significantly more confident after the training. The mean confidence level to manage an overdose (rating out of 5) was enhanced (almost doubled) from 2.2 to 4.17 after the training. The impact of the training was statistically significant (level α (2 tailed test) 0.000).

Seventy-three percent (73%) of participants felt that refresher training should happen at least once a year to remain competent, and out of those, 38.7% felt that refresher training should happen twice a year. Given that workplace first aid re-certification in the Ontario is every 3 years, it was interesting to see that many felt this timeline was inadequate. More than three-quarters of participants (81.7%) responded “yes” to 2.5 hours being appropriate for the duration of the training, while the remaining 18.3% felt that there should be more time invested in the content. More than half of the participants (68.9%) were comfortable with one 4-hour session. This data allowed Nick and his team to increase future training sessions to 3 hours versus the previous 2.5 hours.

Sixty-eight percent (68%) of participants agreed that there are not enough services available to support harm reduction workers and peer responders dealing with overdoses. There were many other challenges faced by participants when they administer overdose response. The major challenges include lack of supplies and resources, lack of adequate training, and fear of panicking “freezing” while performing overdose response. In addition, the mental health of responders is equally important as there is rarely a component of self-care involved in the work that they do, which is very stressful and demanding both physically and emotionally. The data clearly demonstrates the need to upscale training and provide specialized overdose response for high-risk responders that is more in-depth than the current lay rescuer approach. It is time to invest and support frontline workers and community members most at risk of witnessing opioid poisoning.

It is urgent that the lay public and emergency dispatchers (who may be providing over the phone instruction) understand the importance of emergency management of opioid poisoning for those who are not trained, willing, and able to provide ventilations versus those who are able and willing. Administration of naloxone and compression-only CPR is recommended for the untrained public. The recommended approach for those who are trained, willing, and able, should include ventilations in conjunction with compressions and naloxone administration. As such, we must also increase training frequency to allow at-risk responders to properly develop skills in airway management and ventilations to provide them successfully

First aid educators who provide training and certification courses that cover overdose response are encouraged to include training with ventilations coupled with compressions and with a focus on offering more regular and frequent training. It must also be understood that compression-only CPR is recommended for those with no training (lay public) or for those who are trained but unable, unwilling, or lack the confidence to provide rescue breathing.

We would like to share the results of a follow-up survey that was conducted three (3) months post-training. Out of the seventy-five (75) Peer Support Responders that were trained, thirty-one (31) participated.  Fourteen (14) out of the thirty-one (31) indicated they had utilized the skills learned in-class to provide real overdose response. That is 46% in just three (3) months following the training. Additionally, all responders indicated that the person experiencing opioid poisoning survived. We also asked the responders if they used any of the supplies from the emergency backpacks that they received at course. Ten (10) out of thirty-one (31) responders indicated they used various supplies during their real overdose response. That is 32% in three (3) months post-training. Nick and his team are pleased that the training is making a positive impact on the frontlines of the opioid crisis. Nick says, “Our responders are saving lives!” (See page 45 in this report that shows the data).

Statement: “Nothing About Us, Without Us”

The recent release of the American Heart Association’s medical statement on overdose response guidelines has confirmed that the added first-aid elements in CPR-OPR guidelines that are used in our Peer Support Responder training are essential and evidence-based. The Peer Support Responder training received real-time feedback from participants during its pilot phase in March 2021, which provided an invaluable window into the firsthand experience of our participants. We would like to note that the creation and development of effective overdose response trainings requires not only scientific evidence but must also draw from the lived experiences of people who use drugs as well as the professional observations of frontline workers and service providers. As we continue our efforts to counter the overdose crisis, we embrace the principle of “Nothing About Us, Without Us”. We would like to acknowledge and thank all the people with lived experience, the frontline shelter, outreach, and harm reduction workers, as well as the allies who assisted in the co-creation of the Peer Support Responder (CPR-OPR) training.

Get the Latest News & Updates. SIGN UP for our Newsletter! Dismiss