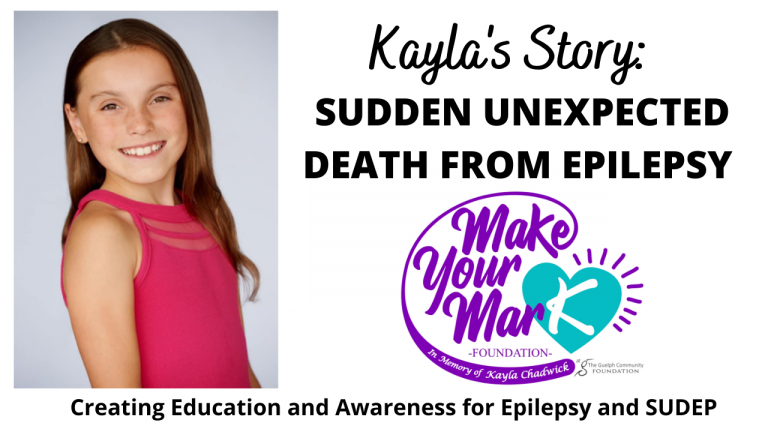 “It is with great heartache and sadness that the autopsy report came back for our beloved 10-year-old little girl, Kayla. It was confirmed that the cause of death was SUDEP – Sudden Unexpected Death in Epilepsy. Kayla had never been formally diagnosed with Epilepsy.” —
Geri McIver, Kayla Chadwick’s Mom and Registered Nurse

On April 8th, 2019  Kayla had a second seizure within an hour of falling asleep. On April 9th, 2019 Kayla suffered a third seizure.

Kayla underwent physical examination, laboratory work, and a sleep deprivation test. All of Kayla’s test results came back negative.  No formal diagnosis was given.

Following these subsequent episodes Kayla’s Pediatrician made the decision to prescribe Kayla a low dose of anti-seizure medication.

Kayla, by all accounts, was a very happy, healthy and strong young girl.  She was extremely active and had a passion for competitive dance and acrobatics.

On December 12, 2019, after being seizure-free for 8 months, Kayla had a seizure during the middle of the night while sleeping.  One in which she was unable to overcome.  Sadly, Kayla passed away.  She was only 10 yers old.

When Geri went to wake Kayla for school the following morning, she found her unresponsive and not breathing. Despite the best efforts of Geri and Guelph EMS personnel, they were unable to revive Kayla Chadwick.

Each year 1 in 1,000 adults, and 1 in 4,500 children with Epilepsy die from SUDEP. This is most likely a low estimate due to poor case identification and lack of awareness. The cause of SUDEP is unknown. It usually occurs at night or during sleep, thus making it difficult to determine exactly what happened during the last moments of life.

“A severe seizure can temporarily shut down the brain, including the center that controls respiration, and if a person is sleeping and lying face down, death may occur,” said Dr. Orrin Devinsky, director of NYU Langone’s Comprehensive Epilepsy Center in Manhattan.

“About 70 percent of cases occur during sleep, and the people are often found face down in bed. Usually, they have been sleeping alone”, Dr. Devinsky said.

He adds that seizures can also impair the arousal reflex, which normally causes people to move or shift positions during sleep if their air supply is blocked.  If someone else is present and can roll the person over or try to rouse them, that can be lifesaving,” Dr. Devinsky said.

“It can happen to anyone with Epilepsy. Even the first seizure could be the last one. The more uncontrolled the seizures, the more severe, and the more they occur in sleep, the higher the risk,” he said.

At Heart 2 Heart First Aid & CPR Inc., we believe further research is urgently needed in order to help those with Epilepsy understand how to lower their risk of SUDEP. While not as common in children, SUDEP is a potentially preventable cause of death during childhood. A Canadian Pediatric Surveillance Program study is currently underway to investigate the incidence and risk factors for SUDEP in Canadian children.

Kayla’s story and legacy will save countless lives as we bring more awareness to this life-threatening condition known as Sudden Unexpected Death in Epilepsy (SUDEP).  Her life, although short, will have a significant impact to parents and people living with seizures and Epilepsy. Please support her cause today.  Even a small donation of $25, $50 can have a significant impact.

The Make your Mark Foundation was created in memory of Kayla Chadwick by her family. We hope that by sharing Kayla’s story we can both raise awareness and encourage research into Epilepsy and SUDEP. All funds raised will support research dedicated to Epilepsy and SUDEP throughout Canada.

Get the Latest News & Updates. SIGN UP for our Newsletter! Dismiss